The Writing Prompt is based on the anime/manga One Punch Man; specifically, the character Mumen Rider. 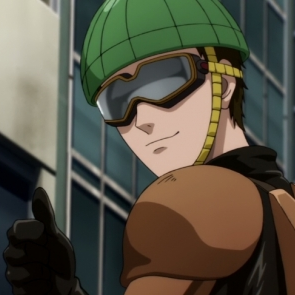 [EU] You are visiting your grandfather for the first time, after a couple of days he takes you to the garage, shows you an old bicycle and says – “I think it’s time for the Mumen Rider to ride again”

“The hero association hadn’t been around all that long when I got my start.” He says as he dusts off the handlebars. He had to feel his way into the garage — he was blind after all — since he dismissed my offer to help. I was blind, too, but I had taken the chance and had a cybernetic upgrade from Kuseno Corporation so that I could see. I watched and listened intently. “I’m sure you think I’m crazy, or it’s dementia, but it’s not. As a young man, I became the hero Mumen Rider. I defended the cities as a hero of the Association for many years, prior to my retirement. I…” He smiled as he touched the bicycle. “I will need to make some upgrades to her before you begin your training.” He turned his blacked-out glasses gaze toward me, “It’s time for you to take up the bike and ride.”

I had no idea what to say. At first I was taken aback, and I held up my hands. “Grandpa, I know Mumen Rider.” I looked at the bike — it really did look like Mumen Rider’s bike — “And that looks like his bike. So, you’re telling me that you’re Mumen Rider?” I inhaled, and exhaled the following words with haste. “For real?”

I watched the old man who was my father’s father smile. It was so genuine, so pure. The man had been a beacon of what path to lead my whole life. He supported me, built me up, and helped me rise to the top of my Judo, my studies, my strength training, and even an healthy eating regimen. He nodded. “I was. I suppose I still am, in some sort or another. But Mumen Rider needs to ride again, and you are the perfect candidate. You are pure of heart, you search for justice, you help others, and you believe in making the world a better place. If anything, you are an even better candidate that I was when I first took up the bike.”

I still didn’t know what to say. My heart swelled with pride, and tears threatened to stream down my face. “Of course, grandpa. I would be honored.”

For the next several months, I spent nearly all day and night with my grandfather. He taught me things I didn’t already know, and honed the things I knew. Strangely, when he was teaching me all that he had to teach, he never once seemed to need the assistance that he pretended to need when he was at home. This man who was schooling me on how to become a hero, was all the hero now, that he was thirty years or more ago. This old man was still Mumen Rider, just as sure as I stood before him. One day, near the end of the four month span I spent training with him, he came to me with a very upgraded version I saw of the bike on the first day. That same day, he presented me with an upgraded version of his classic outfit. And finally, on the very same day, he took me to be graded by the Hero Association.

After giving it all I got, I ended up being classified in C-Class. Even now, I’m just thankful to be a hero. As we left that day, my grandfather said something to me that I’ll never forget. He said, “Mumen Rider,” calling me by my new hero name, “if you ever happen to run across a man by the name of Saitama, tell him I said ‘thank you’.” I asked him why, of course. My grandfather’s answer? “He taught me to love mozuku.” I didn’t pry any further.

So far I haven’t run into this “Saitama.” But I have encountered by first Dragon-class monster, and I was blinded again. In honor of my grandfather, who has since passed, I opted to not have my cybernetic eyes replaced.

I have a legacy to keep, after all.

T.G. Neal is a southern born and raised man with his head in the clouds. He’s been a huge fan of high fantasy and science fiction his whole life. His writing started when he was in my early teens by long-form roleplaying on the internet, and then developed it into short stories and fan-fictions as he grew older. He sought a degree in English Lit from the University of Montevallo, but his thick head decided the military would be a better idea (spoiler alert: it wasn't.) He got married at 19 (best idea of his life), had his first child right before he turned 21, and have been chasing the dream of being published since... well, forever. View all posts by Taylor Neal