Giving myself certain tasks to write on gives me a guide to go by. Keeps me in line. That being said, there will always be a chance for variation or a second article. And fortunately all of these things are things I enjoy. So, hold onto your butts.

The first movie I’m going to reference is kind of part of a week-long piece I’ll do, and as I write, I think you’ll see the reason why. The first movie I’ll review is: Chef. I’m sure that those of you who read pretty regularly are wondering why it isn’t Star Wars… well, that’s because you expected it to be! Just kidding.

Chef is a movie for just about everyone. First, let me say this: I’ve been on a cooking trip for a while, and this movie perfectly captures what it is to cook — to really cook — and to enjoy being a person who prepares food. There are differences there, too, because when you cook and you’re just doing it, it doesn’t taste as good as a person who does it because they love it. The starring character, Carl Casper, played by (and directed by) Jon Favreau. Let me also say that there may be some bias, because Favreau, as an actor and a director, is one of my favorites. He’s also framed by other actors like John Leguizamo, Scarlett Johansson, Dustin Hoffman, Sofia Vergara, and a quick cameo by Robert Downey Jr. Check out the trailer.

I first discovered the movie, thanks to Binging With Babish, a YouTube channel that caught my eye on his third episode. I’ll address that this Friday, for the Food post, guarantee it. Now, onto the spoiler free review:

Carl Casper is essentially a dad who’s too busy for anything besides his restaurant, and even there, he’s limited by what he can do. Chef is about a man finding his way, his passion, and his love, all over again. It’s about lovingly preparing food, and it’s about really just… loving. It’s also sort of a coming of age film, as it follows Carl Casper and his son’s relationship. Martin (John Leguizamo) fills the important role of the sidekick, but he’s also the spirit of the movie. Everybody has to have the go-to guy to get something done, and that’s him. Always present. Always ready to help. He’s the Samwise Gamgee to Carl’s Frodo Baggins, and that’s the best way I can describe it. 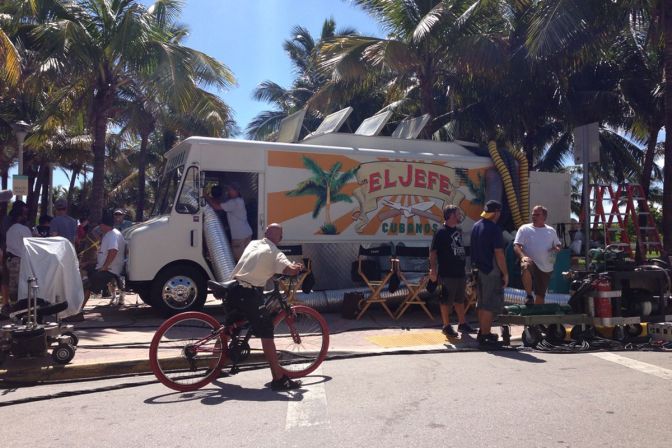 Carl’s life is all but torn asunder, and he’s left windless after making some (albeit uneducated-ly) bad decisions, and he has to find his way again. Fortunately for the viewer, him finding his way is a journey of epic proportions, and easily relatable to the audience. Anoter really cool fact, is that every restaurant he visits on his journey — aside from the restaurant he starts the movie in — is a real restaurant. Keep that in mind as you watch the film.

The acting, directing, locations, and the food in the movie is what brings it all together. But the presentation of cooking — not shirking the fact that it is long, hard work — and that it is a labor of love, through and through, is what makes this movie a gem. Truly, a diamond in the rough. And I absolutely love it. I could watch it over and over, and it’s because of the food, because of the relationships, and because of the pure joy that the crew seemed to have while filming it.

If you’d like a Spoiler-included review, drop a comment, I can go back and amend this writing with the necessary information. I’m not a fan of spoilers, however, so I won’t likely ever include them unless the reader’s prefer it that way.

You can watch the movie Chef on Amazon, rented or purchased, although at the time of this article posting, it is not available to stream anywhere. Click here to view the movie.

Photo by Noom Peerapong on Unsplash

T.G. Neal is a southern born and raised man with his head in the clouds. He’s been a huge fan of high fantasy and science fiction his whole life. His writing started when he was in my early teens by long-form roleplaying on the internet, and then developed it into short stories and fan-fictions as he grew older. He sought a degree in English Lit from the University of Montevallo, but his thick head decided the military would be a better idea (spoiler alert: it wasn't.) He got married at 19 (best idea of his life), had his first child right before he turned 21, and have been chasing the dream of being published since... well, forever. View all posts by Taylor Neal

One thought on “Movie Monday”